Cell migration is an essential process in a number of biological contexts. During development, for example, directed cell migration toward specific regions of the embryo is essential in determining the correct localizations of future sites of tissues. Cell migration during tissue morphogenesis is crucial for the proper development of tissues and organs. In adults, immune cells migrate through tissues and stromal networks to probe the body for foreign agents and during the immune response to an infection. In regenerative tissues in adults, such as the gut, cell migration is crucial to ensure homeostatic function in these tissues. In later stages of tumor progression in cancer, the migration of cancer cells away from a primary tumor, a process known as tumor invasion, can lead to later metastasis at secondary sites. Currently, during my postdoc in the Vignjevic Lab, we are trying to better understand cell migration in different contexts using a wealth of different model systems and experimental setups.

Despite the importance of tumor invasion in epithelial cancer progression, surprisingly little is known about how cancer cells escape the tumor and migrate through the surrounding tissue. Histological studies have shown that invading cancer cells can have a wide variety of morphologies, and collective modes of migration are commonly observed in human epithelial cancers (Reviewed in Clark and Vignjevic, 2015).

To better understand how cells migrate in a directed manner, we have developed microfluidics devices that can be used to expose cells and cell aggregates to tuneable chemical gradients while embedded in 3D matrices. Could observe a dramatic chemotactic response using dendritic cells, a type of immune cell, exposed to gradients of the chemokine CCL19.

Dendritic cell cheomtaxis. Primay matured Dendritic Cells (mDCs), a type of immune cell, migrating in a microfluidic device with a gradient of attractive chemokine from the top. In response to the chemical gradient, cells move in a directed manner up the gradient. (From Aizel and Clark et al, 2017.)

We can also embed large spheroids of cancer cells in the microfluidics chambers and exposed these aggregates to chemical gradients in order to elicit biased tumor cell invasion. This experimental model mimics the invasion of cancer cells away from a primary tumor in response to chemical cues from the microenvironment.

Biased cell invasion. A large (~500 micron diameter) aggregate of cancer cells in a microfluidic device, exposed to a gradient of attractive medium from the top. Cells migrate away from the aggregate in a biased manner up the gradient. (From Aizel and Clark et al, 2017.)

We are also interested in better understanding the invasion process itself. One assay we employ to assess the dynamics and mechanisms underlying cancer cell invasion and migration in the stroma is a spheroid invasion assay. Similar to chemotaxis assays using aggregates, we embed spheroids of cancer cells in 3D collagen matrices, and using image analysis methods, we can precisely quantify numbers, positions and migration distances of invading cells.

Cell invasion into a 3D collagen matrix. Left: Cells migrate away from a spheroid of cancer cells embedded in a 3D network of collagen. Right: Analysis of the images on the left provide the contour of the spheroid (blue), positions of the invading cells (red spheres) and their distance from the spheroid contour (black lines). (From Attieh et al, 2017 and courtesy of Youmna Attieh.)

We also use number of other assays to assess migration of both normal and cancer cells using primary tissue from mouse models, including tissue explant models and 2D and 3D organoid cultures. Combining high-resolution live image imaging and image analysis, our aim is to more precisely characterize and understand the underlying principles and control points of tissue migration in healthy and disease states.


The actin cortex is a thin network of F-actin, myosin and associated proteins that underlies the plasma membrane (PM). The cortex provides stability to the cell surface and is the primary determinant of cell surface mechanics in most animal cells. As a result, the the cortex allows cells to resist external forces and change shape.

In my previous work in the lab of Professor Ewa K Paluch, I developed a novel method to measure the thickness of the cortical network in live cells. This method was inspired by Single-molecule High Resolution Colocalization (SHREC), which relies on the fact that although sub-resolution geometry cannot be resolved, point-like objects can be localized with up to nanometer precision, even with a light microscope. To measure cortex thickness, we labeled the PM and cortex with chromatically different fluorophores (Figure 2A,B; Clark et al, 2013). Using a theoretical description of cortex geometry, we could use the information about the relative localization of the cortex and PM to determine cortex thickness (Figure 2C; Clark et al, 2013). We performed a number of controls to verify this method, including using different fluorescent probes for actin, changing the colors of the probes and analyzing computer-generated images of cells. 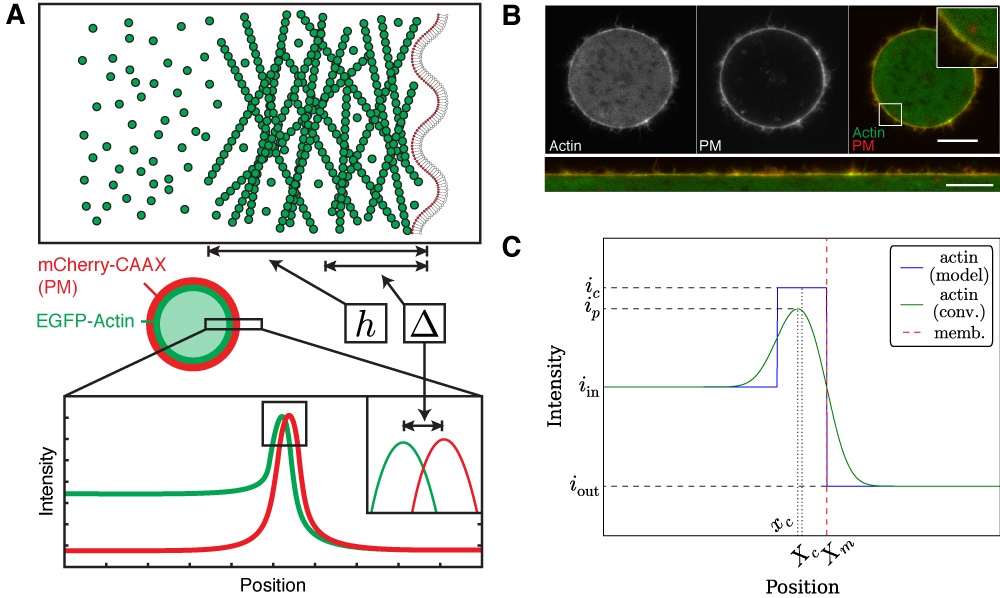 Cortex thickness measurements. A. Schematic representation of method to measure cortex thickness. Cortical actin and the plasma membrane are labelled with chromatically different fluorophores, and distance between the fluorescence peaks, Δ is measured and related to cortex thickness, h. B. A HeLa cell expressing GFP-Actin and mCherry-CAAX, a marker for the plasma membrane. Bottom, a straightened image of the cell border. Scale bars: 10 μm. C. A simple theoretical description of cortex geometry showing the actin model, a convolution of the actin model (to mimic the imaging process) and the position of the membrane. (Modified from Clark et al, 2013.)

To test if this method could be used to used in live cells undergoing shape change, we measured cortex thickness in blebs. Blebs are membrane protrusions that can form from a local weak point in the cortex. Because intracellular pressure is higher than extracellular pressure, cytosol flows from the cell body through the weak point in the cortex, blowing up the plasma membrane like a balloon. The bleb continues to expand until a new actin cortex reforms under the bleb membrane. The contractile actin cortex in the bleb first slows bleb growth and eventually leads to retraction of the bleb back into the cell body. Blebs have been shown to play a role in cytokinesis (Movie 2) and are also used in some forms of cell migration (Movie 3).

Blebs in cytokinesis. A HeLa cell blebbing at the polar regions during cytokinesis. Such polar blebbing has been hypothesized to stabilize the position of the cleavage furrow and ensure successful cytokinesis. (From Sedzinski and Biro et al, 2011.)

Because blebs initially lack an actin cortex, this provided an ideal system to test our method to measure cortex thickness. By measuring thickness in blebs, we would initially expect a low thickness, when the cortex is just starting to reform, and thickness would then increase over time as the cortex regrew. We induced blebs by locally ablating the cortex with a pulsed UV laser, which induced a bleb at the site of ablation (Movie 4; Clark et al, 2013). By following cortex thickness over time in blebs, we found that the bleb cortex was indeed initially thin and grew thicker over time, eventually returning to the pre-ablation thickness (Clark et al, 2013).

Inducing blebs by laser ablation. A HeLa cell expressing GFP-Actin and mCherry-CAAX. At t=0, the cortex is ablated with a pulsed laser to induce a bleb. Scale bar: 5 μm. (From Clark et al, 2013.)

Simulation of a 3D cortex Simulating actin filaments, myosin motors and actin cross-linkers in a 3D volume shows how tension builds over time. Using such models, we can change a number of microscopic parameters and test how they affect larger scale properties like tension, allowing us to predict aspects of how cortex mechanics are controlled. (From Chugh, Clark and Smith et al, 2017 and courtesy of Matt Smith)

Based on our results from experiments and simulations, we found that cortical tension is maximal at intermediate filament lengths, suggesting that filament length and the resulting cortex architecture must be tightly controlled to ensure proper maintainence of cortex tension.


In my previous work in the Bement Lab at the University of Wisconsin-Madison, I also studied the actin cortex, but in a very different context. The Bement lab uses the African Clawed Frog, Xenopus laevis, as a model system to study how single cells repair wounds and how cells divide.

Cells in the body can be subject to a number of stresses that may induce physical damage to the cell. For example, when you exercise, muscle cells are stretched and strained, which can lead to small tears in the cells; if this tearing in extensive enough, it can also be quite painful! For many cell types in the body, when a cell experiences damage, it would be inefficient or even impossible to simply get rid of the damaged cell and generate a new replacement. Muscle cells, for example, can be up to several cm in length and can fuse together to increase the length of a single cell. Single neurons can be over a meter long in humans (depending on a person's height) and do not have the capacity to regenerate in adults. Thus, when muscle cells and neurons experience physical damage, intrinsic processes must be in place to repair this damage and prevent cell death.

One system that the Bement lab uses to study wound healing is the Xenopus oocyte, which are approximately 1 mm in diameter (clearly visible by the naked eye) and are very robust wound healers. These oocytes can be poked with glass needles or shot with pulsed lasers and continue to survive happily after they have repaired the damage. Oocytes, like most other animal cells, have an actin cortex underlying the plasma membrane. When cells are wounded, not only is the plasma membrane torn, but the cortex is disrupted as well. In order to repair the damage to the cortex, actin and myosin accumulate in a contratile ring around the wound and the ring contracts over several minutes to seal the hole in the cortex. Movie 5 (below) from Craig Mandato, a former postdoc in the Bement lab, shows a the accumulation of actin into a contractile ring following wounding of a Xeonpus oocyte with a pulsed laser.

Wound healing in a Xenopus laevis oocyte. A Xenopus oocyte injected with fluorescent phalloidin (a probe for F-actin) is wounded using a pulsed laser. F-Actin accumulates into a contractile ring which constricts, closing the hole in the cortex. (From Mandato and Bement, 2001.)

One of my projects in the Bement lab was to peform a screen of small molecule inhibitors to find new chemicals that could prevent actomyosin contraction during single-cell wound healing and cytokinesis. I performed a manual screen of 1990 small molecules by incubating Xenopus oocytes in the chemicals, stabbing them with a glass needle and scoring their survival and efficacy in wound healing. In parallel, collaborators Jenny Sider and George von Dassow screened the same set of chemicals for inhibition of cytokinesis in Sand Dollar (Dendraster excentricus) embryos. We followed up on hits from the parallel screens and discovered two potent inhibitors of wound healing and cytokinesis, Sphinctostatin-1 and -2 (Clark et al, 2012).

In the Bement lab, I also studied how cells heal wounds in the context of a multicellular tissue. For this study, we wounded cells in early Xenopus embryos using a pulsed laser. Surprisingly, we found that if cells were wounded in the proximity of neighboring cells, the neighboring cells would also upregulate contractile actomyosin and help the cell to heal its wound (Movie 6).

Wound healing in an early Xenopus embryo. A single cell in a Xenopus embryo expressing EGFP-rGBD (a probe for active RhoA) and mRFP-Utrophin (a probe for F-actin) is wounded. A RhoA is activated and F-actin accumulates in a contractile ring, neighboring cells also upregulate RhoA and F-Actin, which contributes to healing the wounded cell (From Clark et al, 2009.)

The Bement lab continues to study both wound healing and cytokinesis and also focuses on cross-talk between actin filaments and microtubules. Be sure to check out Bill and George's websites for great movies of these processes!